Posted by janebuchananwrites on December 23, 2017 in Uncategorized |2 Comments

The part I remember most was a girl pulling the beard of a toy store Santa to prove to her friend he was fake. But the beard was real! It was really Santa!

She was afraid that Santa would be angry and wouldn’t bring her friend any Christmas presents. She made a creche out of old toys from the attic and sneaked out into the snowy night to deliver it secretly to her friend so she’d have something to open on Christmas morning.

It was a small book. The cover was red. The dust jacket was white with a snowy landscape and a girl in a red coat. The title had the word “secret” in it, I thought. And “Christmas.” But a search for Christmas Secret was fruitless.

No one else in my family remembered it. I asked every children’s writer friend, every children’s librarian, and, when it became a thing, I googled it. People said, “Maybe it isn’t a real book. Maybe you should write it yourself.”

I didn’t write it myself, because I knew it was out there. But I did write The Berry-Picking 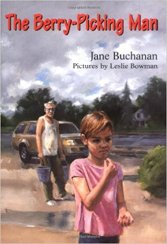 Man, which is my contribution to the genre (though you wouldn’t know it to look at the cover!).

In the meantime, my internet searching turned up Loganberry Books. They had a service called Stump the Bookseller. I submitted my query and waited. But it seemed even they couldn’t help me.

Then, one day, years later, I was searching for something completely unrelated when up popped a link to my answer on Loganberry Books!  The title was Christmas Secrets. I was so close! And the author was Bayard Hooper. It was, it turns out, his only children’s book. The illustrations I loved so much were by Hope Meryman.

I went immediately to Amazon and found two copies listed there. I bought them both and waited with nervous anticipation. What if the story wasn’t as wonderful as I remembered? What if, after all these years, I was disappointed? 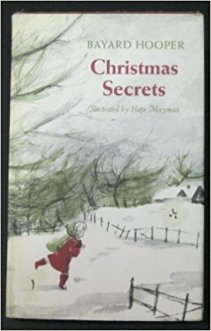 When the book arrived, I ran my hand over the cover. I’d remembered it exactly. A small girl in a red coat dashing through a snowy landscape. I flipped through the pages and took in the illustrations. I remembered them all. And then I started to read. I finished it was tears in my eyes. It was my long lost book, and I still loved it!

I gave one copy to a woman at my church who read to the children during the Christmas service every year. She shared it that year, and, though it turned out to be a bit too long for a church read aloud, I was delighted.

The other copy I kept. But, a few years later, during a hasty move in the midst of life’s turmoils, it got left behind. And I also lost the emails where any trace of title or author could have been found. (Bayard Hooper is not a name that springs easily to mind! And a search for “Christmas Secrets” brings up everything but my special book!)

But the other day, feeling wistful, I decided to search it down again. It was easier this time, thanks to the archives of Loganberry Books. Back to Amazon. I only bought one copy this time, and it won’t be here for Christmas. But it’s on its way!

I’m not sure why that book touched me so much. Something about pulling Santa’s beard. And the creche, I think. My best friend Joany and I each had a creche, and we used to carry them to each other’s houses and play “crush”  as we called it then. Mine had a stable made of cardboard and a flap that folded up to keep the pieces safe inside. Joany’s had a baby that came out of the manger, and I was  so jealous. My plaster Jesus and manger were all one piece. I don’t know which came first, the book or the obsession with creches. But it’s a passion that stayed with me until that move where I lost not only all my Christmas books but also my creche collection–including the one I used to carry over to Joany’s–and years worth of ornaments gathered over the years.

That was it for me and Christmas for a long time. It’s only in the last couple of years that I’ve begun to feel that love again. Last year I bought myself a new creche. And you’d better believe the baby comes out of the manger! And I’ve been thinking about The Berry-Picking Man, now years out of print. It’s a reminder to me that nothing lasts forever. But we can keep things in our hearts, and sometimes, if we’re lucky, we can touch them again for a while. Maybe, like my favorite book, it will put us back to a special time, or maybe it will open us to something completely new. But the key is to open our hearts, like Meggie does in The Berry-Picking Man when she shows a little Christmas love to a lonely old man who talks to himself and doesn’t smell very good. That’s an act that crosses all creeds and all ages. And it’s an act we can all use a bit more of in these dark times when it can seem as though Scrooge is hunched over his desk and muttering “humbug” to us all.